Introducing a New Cat into the Household 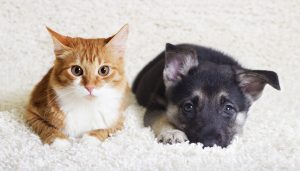 Cats are extremely emotional beings and can very easily get stressed, especially when their home changes. The basic instinct for cats in a stressful situations is to run and hide. That’s why, introducing a new cat into a household can be a tricky business. On top of being emotional, cats are highly territorial too. When you change their familiar territory, you have to be patient and thoughtful with them, allowing them to adjust to the new surroundings at their own pace. However, you can use and benefit from the following tips to make the transition into a new household a bit easier.

Introducing a New Cat into a Household Without Any Other Pets

We have already established how territorial cats can be. So the best way to make a cat comfortable in a new household is to set a small space just for him/her. This space would serve as a safe haven, containing all the necessary things that the cat would need. Like a food and water bowl, a litter box, a sleeping mat or cushion, a few toys etc. Allow the cat to adjust to this space and visit often. But don’t force affection onto the cat, let him come to you when he/she wants.

After a while let the door stay open and allow the cat to explore the rest of the house and become familiar with all the sounds and smells. If you let this transition happen at the cat’s own pace, adjustment into a new household won’t be such a problem.

Introducing a New Cat Into a Household With Other Pets

The first step to take before introducing a new cat into a household with other resident pets would be to create a safe haven for him/her like we discussed earlier, allowing the new cat to feel less stressed. This will give him/her some time to adjust to the new smells of the house and scents of other pets. Providing a separate space for a new cat will also allow your other pet to adjust to the new cat’s scent as well. You might even be able to keep your resident pet from catching a shelter disease that the new cat could carry.

In a household with resident cats, introduce your cats to each other with supervised interactions. Remain calm throughout it and if your resident cat misbehaves try using a calm voice and separate the cats rather than punishing him. Repeat the interactions until they become calmer. Try swapping their sleeping cushions to make them used to each other’s scents. Don’t interrupt their fighting or chasing as this is how they get used to each other and establish boundaries. However, if the fights become too aggressive try using a water spray gun on the cat that is inflicting the aggression.

Introducing a new cat to a household with a pet dog can be impossible if he is not an obedient puppy. With an obedient dog you can easily correct him and have more relaxed interactions when he meets the cat. Allow the two to meet under supervision only, for the first few months. Correct your dog whenever he misbehaves to let him know his behavior is unacceptable. Let the cat come to him and allow the two to create a harmonizing relationship.

The key to introducing a new cat into the household is to be patient. Some cats adjust faster but some take their time to adapt. Your reaction to the whole situation can make the process a thousand times easier. So don’t lose your patience and trust in the timing of things! To learn more about caring for your new cat contact Premier Veterinary Hospital today!