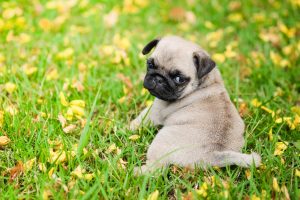 You know there are many dangers that your furry friend can face in their lifetime, from external threats such as cars and bloodsucking fleas and ticks to internal parasites and diseases that can live within your pup untreated for a long period of time. One of these internal infections that pose a threat to dogs, from older dogs to puppies is Giardia.

Giardia is a single-celled parasite that lives in your dog’s intestine, and it is not a worm or virus-like many other parasites tend to be. It infects older dogs but more frequently infects puppies. Dogs can become infected when they swallow Giardia strains that may be contaminating water or in other substances that have been soiled with feces.

So what will happen if your poor pup is infected with it? These microscopic parasites attach themselves to the intestinal wall and the damage causes sudden, foul-smelling diarrhea. The stool may range from soft to watery, often has a greenish tinge to it, and occasionally contains blood. Infected dogs tend to have excess mucus in the feces and in some cases vomiting can occur. But many dogs infected with Giardia do not get any following diseases or symptoms and many infected pups show absolutely no sign of illness. Giardiasis is the disease caused by Giardia infection and generally results in the aforementioned symptoms. If a dog has Giardiasis for a long time can cause weight loss; poor health condition; and even death so it is important to vigilantly monitor their health and notice any dramatic changes in their bowels or overall health.

To prevent a Giardia infection from happening, the best thing to do is to make sure that your dog has safe, clean accessible drinking water. It is important not to allow dogs to drink water from areas where other animals may have defecated or left their feces.

If you are concerned about your dog being infected, or they show signs of Giardiasis, you can speak to us at Premier Veterinary Hospital and we can perform a test on your dog’s feces to see if it has giardiasis. If your dog is infected with Giardia, your veterinarian can prescribe safe, effective treatment for control of the disease.

It is important to be vigilant and aware of your own health as well as your canine companion because Giardia is a common infection and cause of diarrhea in people. While dog Giardia is not generally considered to spread from animals to humans, human Giardia may infect dogs and then be passed on to humans as the majority of cases are human-caused.

Making sure your pup is safe from the many potential threats of the world around them is an important job for you as a pet owner, but it is exceptionally important to protect them from an infection that you could potentially give them. If you have any concerns about your pup, contact us immediately to put a treatment plan in place and keep you and your pup happy and healthy.